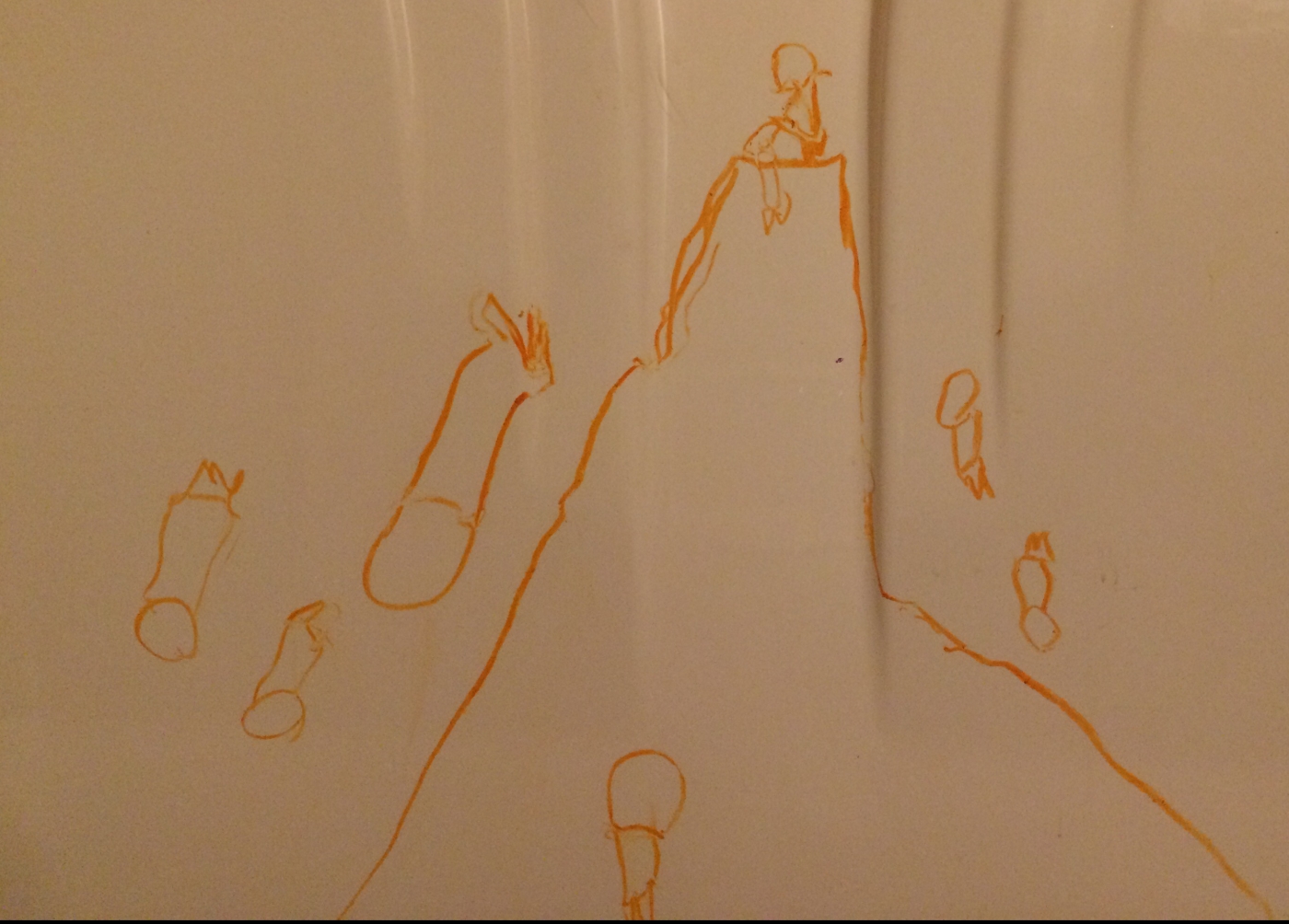 In a house filled with penises, I am determined to keep my feminist spirit alive. This is not easy. It feels insurmountable some days, especially as my boys age and I find myself shielding my sons’ eyes from everything that makes me female while they prance like tiny peacocks on display. These peacocks pee on everything:  bathroom walls, linoleum floors, newly laundered beds, porch railings, trees, flowers. These little peacocks mark their territory with sticky urine.

And it’s not just them. I let the dog out and watch him lift his leg and spray the earth. He comes back inside, then licks himself loudly, unapologetically.

I hear my husband peeing, door open. I can smell it. He needs to drink more water. I say this every morning.

Then there are the cats, tiger-striped brothers. There is no safe place. Their scent is everywhere. 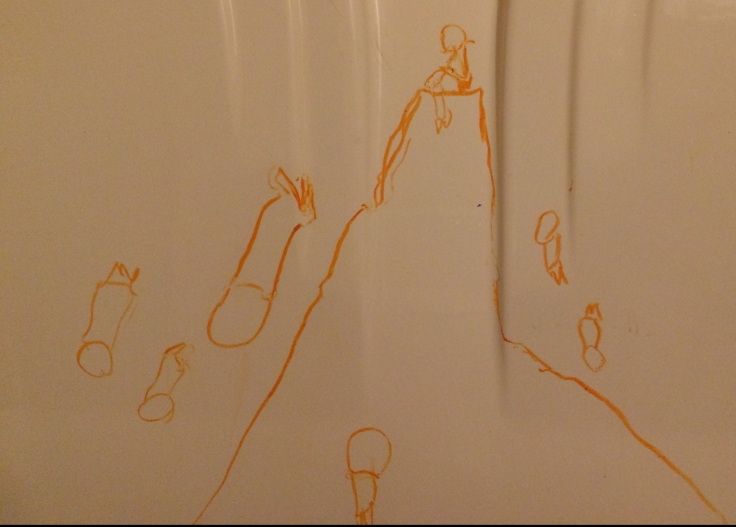 I am surrounded by penises at all times. Big ones, little ones, furry ones, orange ones drawn onto shower walls…but I am supposed to hide my femaleness. Put on a bra. Dress in the closet. Hide behind the shower curtain. Take my tampons and wrap them in toilet paper, wind it around and around and around until nothing shows through. Tuck them into the bottom of the trash bin and cover them up with crinkled Kleenex. I am supposed to pee into the bowl, not on the floor like the men. I resent this as I take the Clorox wipes and wash away the yellowed streaks running from the rim to the sticky base. I reclaim the toilet bowl for myself for a day. Maybe an hour.

On and on it goes. The man-urine soaking into everything. Me with a thin, wet wipe scrubbing furiously. Me on a newly pristine toilet, peeing into the bowl, bent nearly in half, covering my non-penis awkwardly with my torso, while three little boys fight for my attention, yak at me about dinosaurs or what’s for breakfast.

There is no private space for Mom, yet Mom must keep her private places private. Mom must find a way to effectively remove and replace a tampon without it or where it came from ever being seen by her audience. Mom has become a tampon ninja.

At times, I wonder how I would behave should three little girls stand before me instead. Is it simply ingrained in me to hide this monthly inconvenience? This life-giving inconvenience? To find shame in it? I imagine my husband wiping away a red stain from the base of the toilet bowl, and I feel uncomfortable. I birthed our three children. He should beg me to allow him the great privilege of cleaning my uterine lining from the toilet. I close my eyes against the thought of it.

This discomfort with my body has become an odd contradiction. Since giving birth, I’ve found new pride in my body’s strength and mystical powers. It grew a human, three humans, and safely delivered them into the exterior world, with no drugs, no medical interventions, and surprisingly little assistance from the doctor standing by. My body, in its fullest glory, knew the way.

I can see the brilliance of that. I can revel in that. So why can I not explain to my children how they arrived into this world, where they came from?

But I can say “penis.” They know they have a penis, but we tend to call it “Willy” as if it were a living, breathing person. It has taken on its own identity. I don’t know how this started or why, but we have fallen into it in a way that feels too easy.

“Don’t pull on your willy.”

“Don’t pull on anybody’s willy except your own.”

My five-year-old cornered me the other day, in the bathroom of course, wanting to know if I still didn’t have a willy, in the event I had sprouted one since the last time he’d asked.

I shook my head. “Nope. Mama still doesn’t have a willy.”

He took it better this time, unlike the first time when he had broken into tears over my missing member. This time he cocked his head and pondered, “Then, what do you have?”

Here was my moment. I’d screwed this conversation up before and my son had walked away thinking his Mommy was lacking something, something very important, something that allowed you to claim what was rightfully yours. Instead of explaining that Mommy had her own “something,” he left the conversation believing, instead, that I had nothing.

Here was my second chance. I could right my former wrongs and send my young son off into the world understanding that women are wholly formed. We aren’t missing anything.

“Mommy has her own private parts, bud. You have a willy, and I have something different.”

“But what is it called?”

Why was “vagina” such a hard word to say? I’ve said it a thousand times a thousand different ways, but at that moment, my vagina was lodged somewhere in my throat.

This did not come out of thin air. This word had surfaced in the past when discussing euphemisms tacked onto male body parts. Johnson. Jimmy. Dick. Willy. There are countless male names to personify the male appendage. This does not happen with females. Our secret spaces are not provided an identity of their own, so one night we cooked up a list of personas. At some point, Wilma was declared the rightful match to Willy – but this was a conversation with adults, adults who were most likely drinking, and most definitely not attempting to shape a child’s perspective on female sex organs.

Much to my dismay, my son seemed satisfied with the answer and went back to whatever he was doing. I sat there pondering why the Almighty V was such a tricky thing to say when talking to a five-year-old. Why did it sound so ugly? Vulgar? Why did it seem like I was about to shout “FUCK” instead of calmly saying “vagina” in my best Mommy-is-teaching-you-something-amazing-voice?

I have said plenty of ugly words in front of my children (more times than I would like to recall), and yet, I could not get that “v” word out. I just sat there choking on it as my son’s blue eyes blinked at me, waiting for his mother to finally reveal whatever it was she’d been hiding.

Not only did I fail him, I failed that bra-burning feminist inside of me. But she’s always worn too much make-up and shockingly short skirts anyways, so how committed to the cause could she be?

I have yet to revisit this conversation and insert the word “vagina” into my son’s kindergarten vocabulary. I sit and imagine how the dialogue will go until I get caught up in matters of semantics and biology. Must I explain the difference between the vulva and the vagina? Is “vagina” itself sufficient since the vast majority uses this terminology to encompass a woman’s entire pelvic region? Should I really be basing my parenting off of what the majority is doing? Isn’t that how I ended up in this position in the first place?

My mind keeps spinning through these dead ends and hypothetical conversations, and I have yet to engage in the real-world version with my inquisitive little boys. I’m not there yet. But I’ll get there because I am their mother, and they need to know where they came from. That’s an easy fix. I can do that.

What I’m not entirely clear on, however, is how to tackle the hesitation that I have around claiming, and giving name to, what is so beautifully and uniquely mine. How do I unlearn years of shame and conditioning? How do I create a space in which my sons do not shudder at the “v” word or recoil in disgust at its life-giving inner workings? We discuss poop and boogers ad nauseam – never bat an eye. How do I elevate my children’s origin of birth to, at the very least, the level of snot and shit?

I know it starts with me, and I am determined to try. Wilma deserves her rightful name and place within this penis-heavy family. I can’t afford the extra toilet paper it takes to keep the whole tampon thing under wraps.