Google is not my friend. For the past month, I’ve been scanning websites to catalog the horrors awaiting my husband and me on our next vacation. I am using the precise science of scrolling to gauge the likelihood of our first kid-free week in paradise resulting in body bags.

I typically spend the weeks leading up to a trip searching for things to do and places to eat. Not this time. This time, I’m spending late nights, sleepy mornings, and the ever-evasive nap hour scouring the internet for articles on the dangers of Central American travel.

I’ve determined there are numerous threats.

While these annoying insects are not foreign to us, the diseases they carry in tropical climates are. We looked into anti-malarial meds as we will be near the Guatemalan border, a country where the Department of State deems these pills necessary. Since we are all of nine miles from the border at certain points in our trip, it seems we should exercise precaution. The $92 price tag changed our minds, and we opted for two travel sized bottles of Deep Woods Off at $5.19 a pop. Threat eliminated. Sort of.

Illnesses – Hep A and Typhoid

Transmitted via fecal matter passed to food and then ingested, neither of these options do I wish to bring home as a souvenir. After multiple phone calls, voicemails and an elaborate game of phone tag with the local Health Department, I had made arrangements for three vaccinations – Hep A and the flu shot at my physician’s office and Typhoid at Walgreen’s as docs do not typically carry this elective immunization. For anyone traveling to an area requiring vaccinations, line these appointments up at least two weeks prior if not earlier to make sure your system has time to build the antibodies it needs. Four very sore arms later, and we were ready for poop in our food.

Spiders, Snakes and Other Creepy Crawlies

I’m honestly just going to pray we don’t see any. I have zero desire to meet a pitviper or coral snake (red touches yellow, kills a fellow) in the Belizean rainforest. Bullet ants should also be avoided as their sting inflicts unrelenting pain for a full 24 hours. Dart frogs are extremely poisonous, but unless you lick one or have someone shoot you with a blowdart lined in their venom, it would appear you are safe.

I am most concerned with the possibility of a tarantula sighting, not because it can kill me but because I might die of sheer panic. I once unknowingly stepped over a giant huntsman on my doorstep in Australia and launched into hysterics for 45 minutes upon turning to see the dinner plate sized spider sitting on my welcome mat. A tarantula would end me.

Creatures of the Deep

I hadn’t even given this danger much thought until my Google search brought up a long list of fatal creatures living underwater. The world’s most venomous fish makes its home in tropical waters as do various species of spiky swimmers intent on stabbing unsuspecting victims. Jellyfish and fire coral inflict similar pain, and apparently innocuous looking cone shells should also be avoided as they can cause blindness, paralysis and death. We won’t be smuggling any of those home in our carry-ons.

This should be easy enough to avoid; however, on our first true vacation away from the kids, it might be more difficult than I think, especially when the rum punch starts flowing and I am no longer a human fruit snack dispenser. 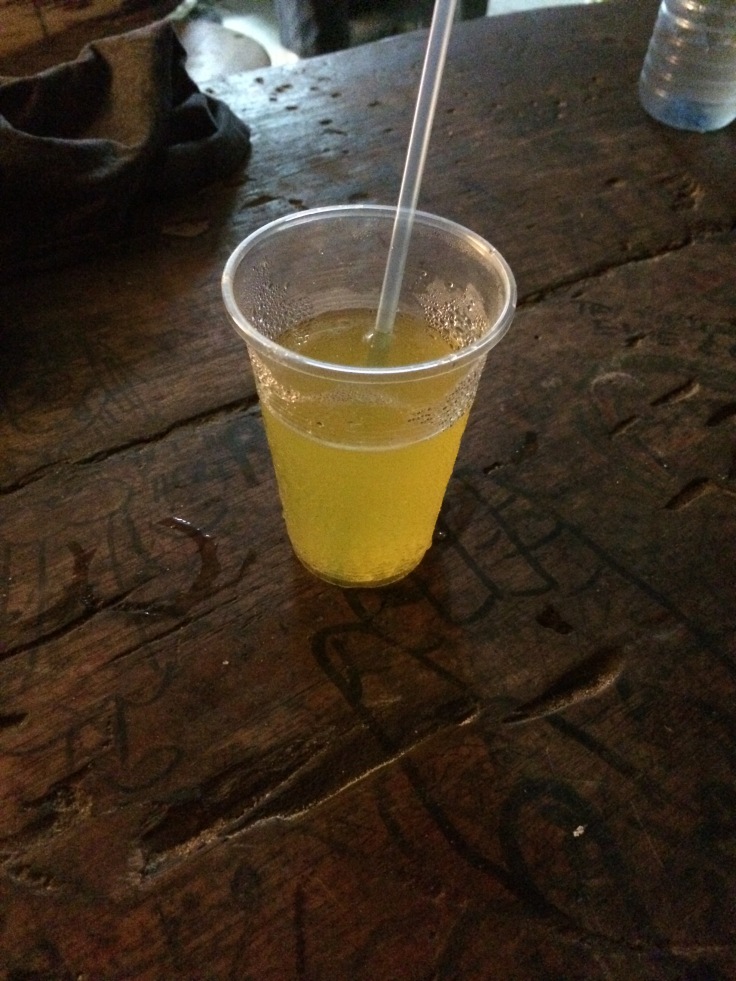 This is the one danger that I can’t seem to prepare for or explain away. It is what started me on this cyber journey into all things terrifying and fatal to begin with.

One article lists Belize among the top 20 most dangerous countries for American tourists. Another newscast which I can’t seem to quit watching lists multiple fatalities – all of them brutal assaults on ex-pats and travelers.

In 2016, a blonde woman from Chicago was murdered and drug into a nearby waterway while doing yoga on a platform by the river. I do yoga. I’m blonde(ish). More significantly, we are staying relatively close to where this incident occurred.

A Canadian couple in the northern section of the country was murdered. An ex-pat stabbed in the doorway of a Belizean home. Two Indiana natives shot while traveling the country. An ex-pat American killed on his farm in rural Belize. Couples held at gunpoint in the Belize Zoo. Six tourists held up and robbed at Caracol – one of the ancient Mayan ruins we are no longer going to visit. My query brings a list of stories, each more gruesome than the last, but I cannot shake the image of the blonde woman.

All I wanted was a relaxing 5 days away with my husband.

I picture us in our private jungle cabana as the sun goes down, my anxiety level rising with each fading ray of light. A snap of a twig cracks against the evening silence. Our assailant waits calmly in the vegetation for his prey to drift toward sleep.

I am heading on vacation to finally get some rest. This is seeming more and more unlikely.

Maybe we have traveled with our children so much that I have forgotten how to do it without them. My husband and I have our fair share of kid-less wedding weekends and our annual away game to watch the Lions fumble footballs, but aside from a night here and there, our alone time is usually spent apart while the other takes on all of the responsibilities.

This is different. This is both of us on the same flight, in the same places. If disaster strikes one of us, it will surely get us both.

When had I become such a worrier?

The second that cry rang out against the sterile hospital walls. Our first born arrived with a head of neon orange hair and bright pink skin, a vibrant signal that life was about to take on a seriousness and weight I had yet to experience.

This weight continued to grow as each new life was entrusted to us – so I can’t just die in the jungles of Belize and leave those lives to fend for themselves. My ghost could not bear the heaviness and would surely be stuck somewhere between heaven and Earth indefinitely. And if I can’t bear it, how could they? They are made of me.

How did I get to this place of engulfing fear?

My unyielding desire to wander – that’s how I got here. We’d taken the recommendation from a friend to explore the tiny Central American country. He had come home rattling on about the mystique of the ancient Mayan temples and the relaxed island vibe on the small cayes that line the country’s eastern coast. He’d even supplied photographic evidence. 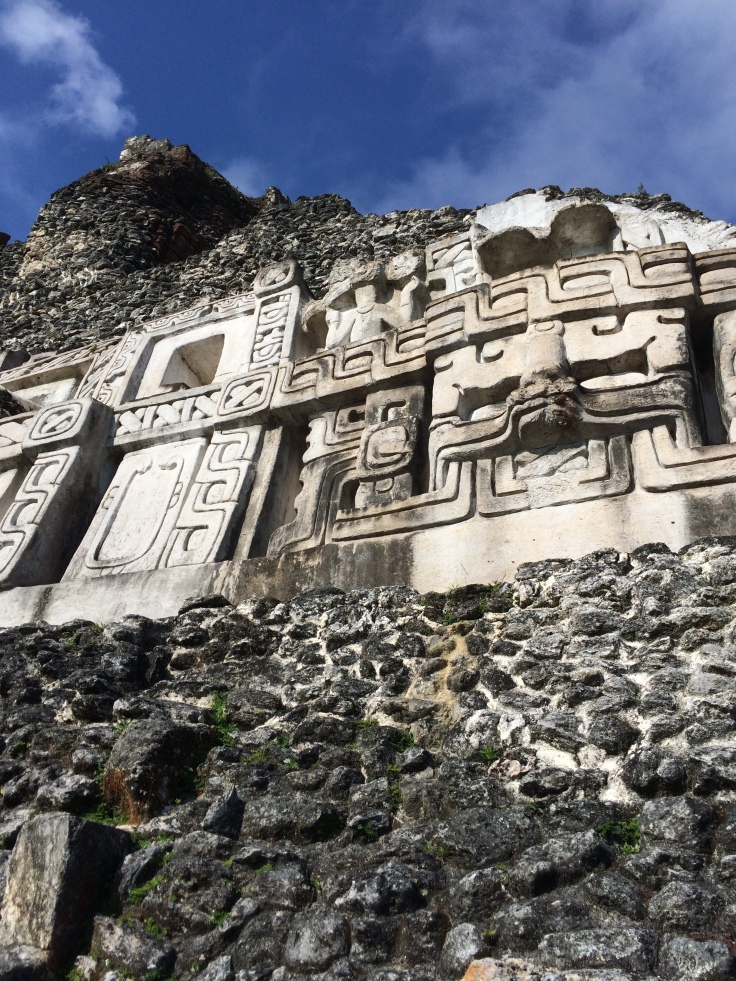 At the time, I hadn’t thought much of it – just an overwhelming sense of jealousy at his free-wheeling lifestyle as I sat there in my rocking chair with two toddlers cuddled on my lap and a third child (unbeknownst to me) just starting to take root inside my body. I could not picture a day when my husband and I could explore the tropical haven on our own.

Three years later, though, and here we are, packing for our Belizean adventure because I have a keen way of imagining travel plans into fruition. At this point, having been face-down in Google for weeks, I have pulled back on the adventure portion of our trip and now envision us sitting in our cabana in the middle of the day, staring at each other, both too nervous to see the sights that originally called us there.

I imagine myself as an Icelandic goddess or Brazilian bombshell planning a trip abroad to America. I get distracted for a moment thinking of my fictional body in a thong. How would my foreign self feel researching a long-awaited trip to the States? Would I feel safe out dancing in a nightclub? Would I feel safe hiking alone on a wooded trail? How about a movie theater? A church? A playground? A school? A Cracker Barrel? A Waffle House, its warm glow beckoning to the weary traveler?

The more I embody my foreign self, the more uncomfortable I grow with my home. Would my foreign fingertips scroll through article upon article of American tragedies? Would I stare into my phone panicked at the sheer number of discarded bodies – statistics that get glossed over and minimized until we accept the atrocities as every day news?

This exercise in body snatching was not helping. My foreign self was scaring the shit out of my American self. I had to do something.

After a month of relentless worry, I found enough courage to crack open the guidebook my friend had loaned us.

Sitting in bed, exhausted from a day chasing children but unwilling to spend another night dreaming of my imminent destruction, I grabbed the bright blue book off the nightstand and leaned back into the safety net of pillows.

I plowed through maps and sample itineraries. I dog-eared locations of Mayan artifacts and rainforest treks to secluded waterfalls and wading pools. My highlighter found the best spots to snorkel and schedules for sunset cruises.

My perspective began to shift.

I could finally see myself laughing into the heat of the jungle instead of bloodied on the side of a river. The wide-eyed girl inside of me stepped forward to eclipse the trembling mother. She sped through the pages, building a new vision for the upcoming adventure with her husband. Maybe we would survive this dream vacation after all and return home slightly better versions of ourselves, racing to the door to catch our children in our sunburned arms. This was the image that felt like the truth.

There are reasons we formed our identities before motherhood. If we hadn’t, we’d never leave the house – not to explore our own country or any others. The risks are too great. Thankfully, the yellow-haired girl has pushed her way back to the front of the line for a moment. She thinks giving in to our fears presents far greater risks.

2 thoughts on “Preparing to Die in Belize”