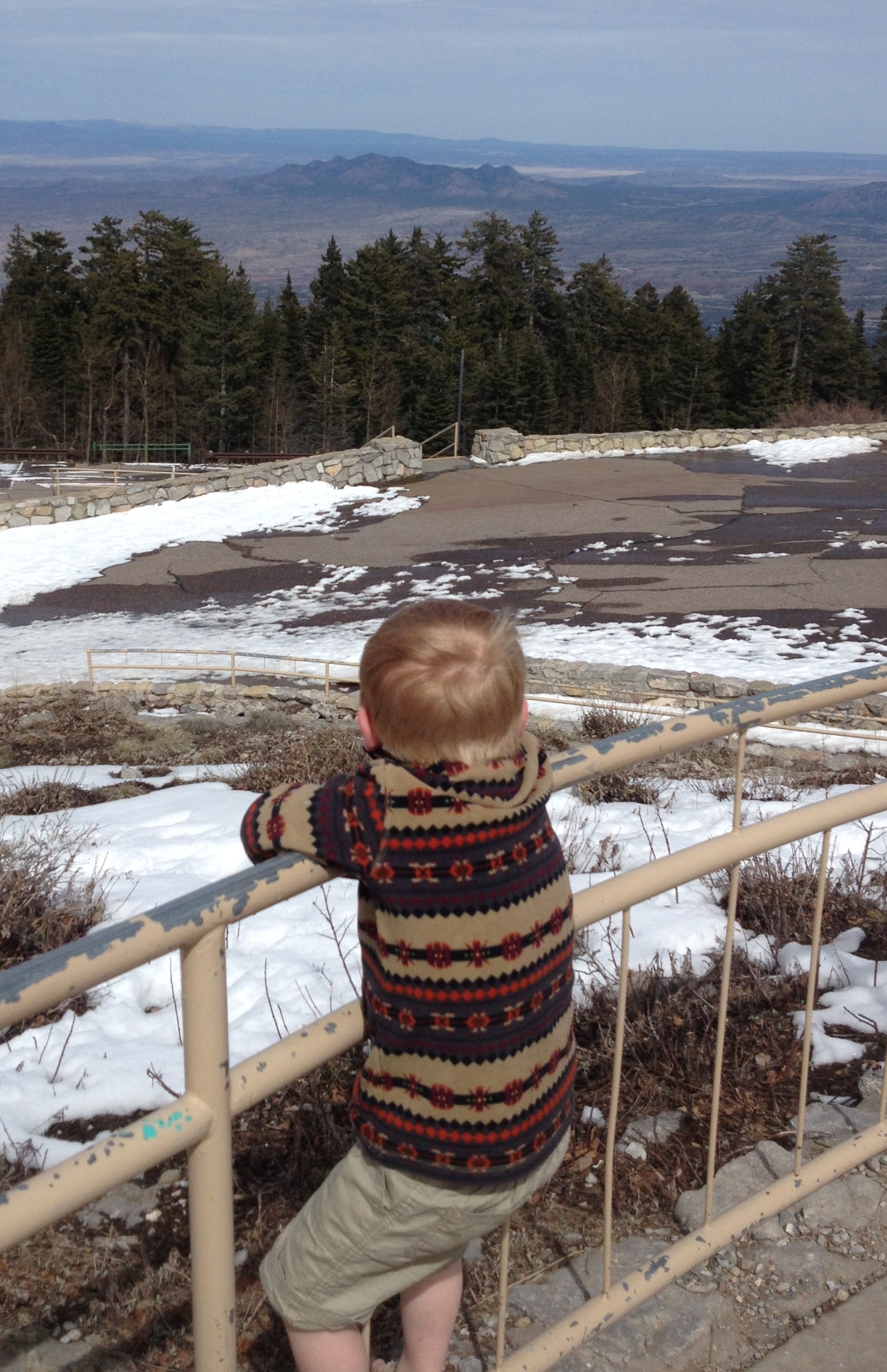 There are a handful of photos from a family road trip last year that haunt me every time I see them – ten or twelve shots on a mountaintop outside of Albuquerque.

We are smiling at the camera. We are looking out over the purples and browns and deep greens of the Sandia Mountains. We are gazing down at the expansive city in the distance. We are laughing together, the dry wind pulling at our hair and clothes. We are taking in something new, and we look happy.

There is one picture, in particular, that I don’t even need to look at anymore because it is always with me, cemented into the back of my brain. My oldest is staring out across the landscape. The back of his strawberry blonde head is to me. His arms are draped over a beige railing in need of paint. His jacket matches the palette of New Mexico.

Yes, this is an overdramatization because that is what we do as moms. Something happens, something small, and we feel that special brand of guilt unique to mothers. We take that something small and turn it into something very, very large.

These snapshots were taken nearly a year ago, and every time that image pushes its way to the front of my mind, that guilt comes back. For something so small, it has painted that afternoon with a big brush stroke, tinting those hues of plum and mahogany and emerald from the mountain range, a shade darker. (I said this would be an overdramatization).

We had a stopover in Albuquerque for two nights before heading on to Arizona. My husband had met up with a friend for a round of golf, so my mother-in-law and I packed the kids up and set off on an afternoon adventure.

The Sandia Mountains overlook Albuquerque and present a stunning entrance to this southwestern city. I had searched the web for the town’s “must-see” spots, and Sandia Peak which sits at the summit of the Sandia Crest Byway ranked right at the top. The kids needed a nap, and we had a few hours to kill before my husband would arrive back at the hotel, sunburnt and slightly buzzed.

The scenic road begins about 25 minutes outside of the city, but the trek to the top takes a fair chunk of time, especially when I’m driving. Not a fan of heights in general, and definitely not a fan of navigating a vehicle carrying my offspring around hairpin turns on the edge of a mountain, I was having a complete mental collapse in the driver’s seat. There was nowhere to turn around. Our giant SUV could not pull a U-ey on the cliffside without a fatality. I soldiered on.

By the time we reached the summit, I was pretty flustered. I recall a diaper explosion mid-ascent and the clean-up once we had parked. I remember shoveling snacks into hungry faces and realizing that although it was 80 and sunny at the bottom of the hill, the top resembled a midwestern March – piles of snow amidst a patchwork of puddles and ice. My kids were in flip-flops and shorts.

I strapped the baby to my back, Grandma grabbed the hands of the two oldest boys and off we went. It was chilly, but the view was amazing, and we lingered longer than people dressed for summer weather should have. My mother-in-law and I took turns snapping photos with each of us snuggled next to the kids, and I made sure to pause a few minutes to really just be there.

And then, my oldest did the unthinkable. He jumped in a mud puddle.

All of the tension I had been holding onto since we left home, four days and 1,500 miles ago, through forgotten bottles and traffic jams and terrifying climbs up unknown mountains, broke free and landed right on my four-year-old. A little boy, standing in an icy mud puddle, in frozen flip-flops.

My anger let loose without warning, shattering the serenity of the gorgeous vista and my memory of those moments together, our little family having conquered the mountain only to be defeated. I shouted at that four-year-old child for being so inconsiderate and rude. How dare he make such a mess of his clothes and, more importantly, mine! Did he not have the foresight to consider his actions would result in tiny splotches of muddy water painting themselves up the back of my pants? And did he not realize that his silly mother had dressed him in shorts and sandals? Who jumps in frigid puddles while wearing such inadequate footwear?

I screamed and scolded until all of the boiling frustration drained from me, and I felt empty. It could have been seconds; the guilt likes to whisper it was hours. It wasn’t.

We might have taken more pictures. We might have stopped for a bathroom break before climbing back into the car, calmly and quietly. I don’t remember.

What I do remember is driving back down the mountain, trying to rationalize my response to such an innocent and playful moment. I remember fearing what my mother-in-law must be thinking of me. I remember questioning if the other tourists had noticed, as if it was possible they hadn’t. I remember wanting to cry from the pure embarrassment.

I remember wondering what my son would remember from that mountaintop. I still wonder every time that guilt creeps in, every time I see that photo or shout at my son (because I still shout at my son), and I feel as inadequate as the footwear I put on my child that day.

But the thing of it is, for anyone watching on social media or flipping through the pages of the photo book that holds these pictures, they would only see smiling faces and a beautiful view. My shame and that nagging guilt would go unseen, locked neatly away in the back of my mind – or the forefront, depending on the day.

Our photos don’t always tell the whole story, so it is up to us, especially as mothers, to share what’s lurking behind those happy pictures. Our journeys are so much more than the smiling snapshots we offer up so readily. Telling the rest of the story might just help relieve some of the guilt that we all feel for those small things that can weigh so heavily on us, the moments that don’t make it to the highlight reel, the ones that we don’t have to share, but maybe we should.